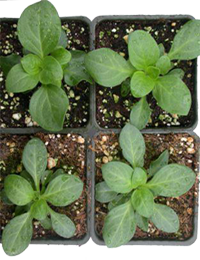 University researchers studied anaerobically digested fiber to determine if it could effectively serve as a soil amendment for potted plants. The fiber (bottom row) was compared to a peat mix (top row). See the difference? We can’t either.

The fiber proved to be an excellent growth substrate with correct physical properties to serve as a soil amendment with a good level of nutrients to spur growth. Unlike composted products, the digested fiber has a longer fiber length and good air porosity. This gives the fiber a spongy quality with the ability to retain more than three times its weight in water for improved moisture control. No weeds developed in the tests. The fiber contains sufficient amounts of total nitrogen (N), available phosphate (P2O5) and soluble potash (K2O) to promote good root development and plant growth (See “Technical Stuff” for more information.). Use subsequent watering and apply fertilizer as needed for sustained growth.

Unlike many other premium potting soils, Magic Dirt™ does not contain peat moss, coir, vermiculite or perlite.  Also unlike peat moss, which releases pollutants when harvested, the Magic Dirt process actually captures methane before it is released into the atmosphere.

Using Magic Dirt as a sustainable alternative to peat moss keeps a lot of greenhouse gasses from ever entering the environment. 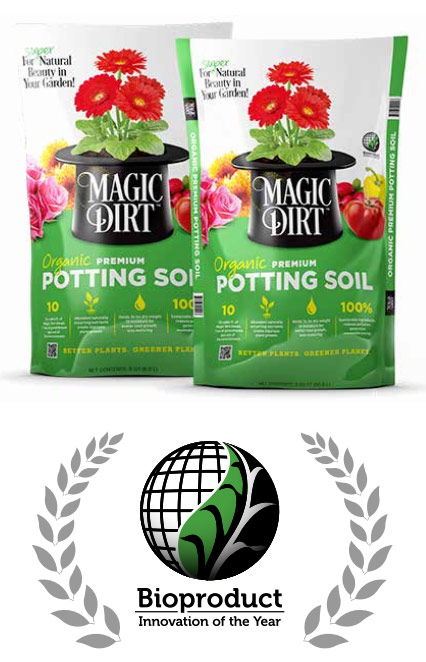 I found the potting soil to be very clean and easy to work with, and the cuttings I planted are now lush and growing great. Soil is really good product for gardeners. -Gayle J.

Continue Reading
Clean and Easy to Work With

I recently purchased and used Magic Dirt for the first time and was very pleased with the product. Thank you for an environmentally friendly product that out performs traditional soil products! - Christine L.

My sister and her husband live outside of Nashville, and yesterday they went shopping for some Magic Dirt. While getting a bag, a man picked up a bag, and asked my bro-in-law if he's ever tried it before. Troy, my bro, said no, but he said he had heard it's good, and then the man said, "Yeah, this is like my 12th bag, I won’t buy anything else now." -Krystal M. 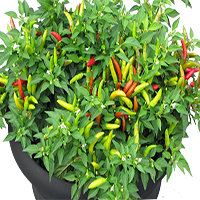 I know people are more likely to speak up when displeased with a product, so I wanted to drop you a line and give you some encouragement. Also, if you'd like to use what I'm about to say in any articles or advertisements, in whole or in part, you have my permission to do so without providing me credit and without compensating me. In fact, I'd be honored if you did so.

Anyway, about a month ago I went to a small farmer's market (I live in Portland, OR, so there's usually at least one a (...)

Continue Reading
I Love Everything about Your Product!

Seldom does a product live up to its hype as MD has done in just a few weeks. Can't wait to see results of growing flowers in Magic Dirt in containers. Thank you again!