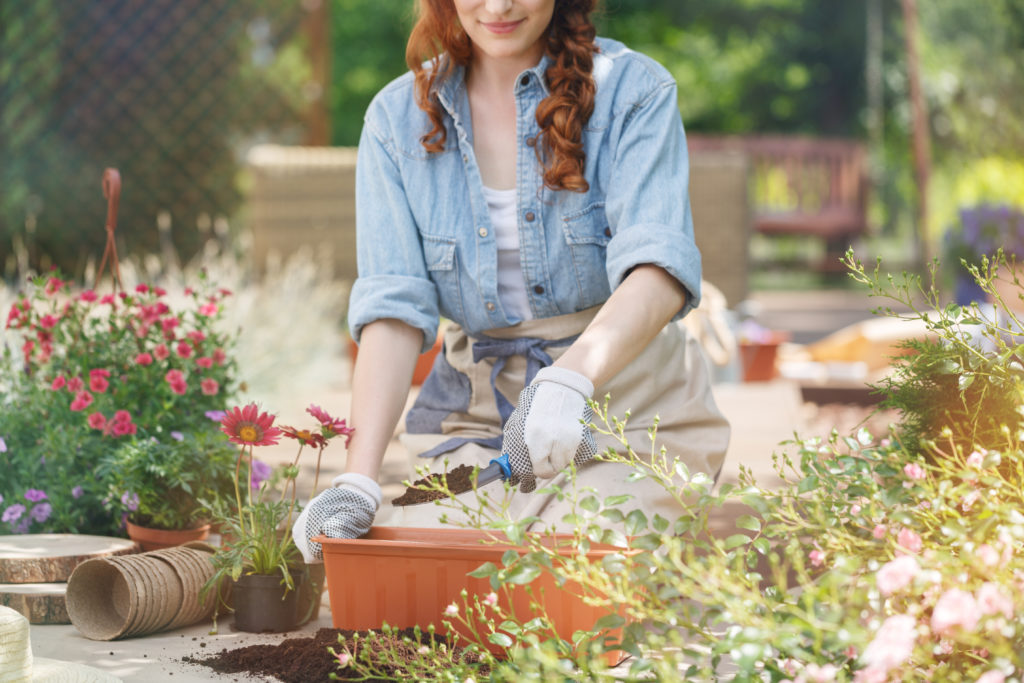 Whether you tend a flowerbed, vegetable garden, or potted plants, the soil you use matters and the impact goes far beyond your own little patch of dirt. Learn about why organic potting soil is best for your garden and what sets Magic Dirt apart.

Not all soil is created equal. Selecting the right kind of soil for your gardening project makes all the difference. There are three basic types of soil (for gardening purposes at least):

Gardeners use potting soil because topsoil and enriched topsoil are usually too heavy and dense for potted plants and gardens. Potting soil provides the best environment for root development and plant nutrition.

What is organic potting soil?

Organic potting soil is made from natural, organic matter like bat guano, worm castings, compost, or manures. It does not contain any chemicals or pesticides. However, the USDA does not regulate how potting soils are labeled; therefore a potting soil may be labeled “organic” as long as it technically only contains natural, carbon-based ingredients.

Potting soil and the environment

Peat moss: This has long been the primary ingredient in commercially produced potting soils. Peat moss is an organic matter typically made from partially decomposed sphagnum moss in bogs. It takes many centuries for peat moss to accumulate and the “peatlands” are a very important environment for plants and animals.

At the current rate, peat moss is harvested for horticultural uses much faster than it naturally develops. Harvesting peat moss destroys the natural bog and wetlands and releases large amounts of carbon dioxide trapped in the bog. Additionally, the very act of harvesting peat moss releases staggering amounts of greenhouse gasses into the environment.

Coco Coir: Some organic potting soils use shredded coconut husks (called coir) from Southeast Asia. Like peat moss, it holds water effectively and is a natural, organic material. Even though no natural habitats are impacted, coir must be shipped overseas in large quantities, meaning it too, has a significant carbon footprint.

Perlite: This mineral is ubiquitous, used in almost every commercial potting mix to improve water drainage. Perlite is a volcanic mineral extracted from open pit mines and heated until it “puffs up” into little white flecks. Open pit mining has a large carbon footprint and leads to other environmental impacts like erosion.

Even though peat moss, coir, and other ingredients are technically natural and organic, their environmental impacts are too great and they offer little nutritional value to your plants. Magic Dirt is truly nutrient-rich, environmentally friendly, and entirely organic.

Nutrient rich: Magic Dirt packs in more than three times the nutrients than similar potting soils on the market. The digested fibers in Magic Dirt are longer and very porous, meaning it naturally holds three times its weight in water and has the ideal density and texture to promote healthy root growth.

Environmentally friendly: Magic Dirt is made from the fiber that is left after organic manure and food waste goes through an anaerobic digestion process. All the methane gas produced during the anaerobic digestion process is trapped and used to generate renewable energy, making Magic Dirt far more environmentally friendly than other potting soil options.

Replacing just one cubic yard of peat moss potting soil with Magic Dirt prevents about one ton of greenhouse gas from being released into the environment. The manufacturing process is green and the materials used are sustainable. Even the bag is recyclable!

Entirely organic: Magic Grow is certified under the USDA’s “BioPreferred Program” as 100% organic. It’s made from organic fiber and composted forest products that don’t require shipment over long distances.

More Magic for your buck

When comparing the price of Magic Dirt to other brands one must look deeper than the sticker price.

Consider the additional fertilizers and nutrients you may have to add to other potting soil options throughout the growing season. The nutrient levels in Magic Dirt are consistently three times higher than other leading organic potting soil brands. Using Magic Dirt lowers your overall cost of fertilizer and added nutrients.

Magic Dirt also holds more water than other leading brands, resulting in better root growth and less need for watering throughout the season. Imagine the cost savings on your water bill!

Whether you are tending an award-winning flowerbed, keeping an indoor herb garden, or growing organic produce, Magic Dirt is up to the task. Magic Dirt is focused on long-term sustainability and ethics in the gardening industry while producing a far superior potting soil! This means that Magic Dirt is great for your little patch of dirt and good for the entire planet.