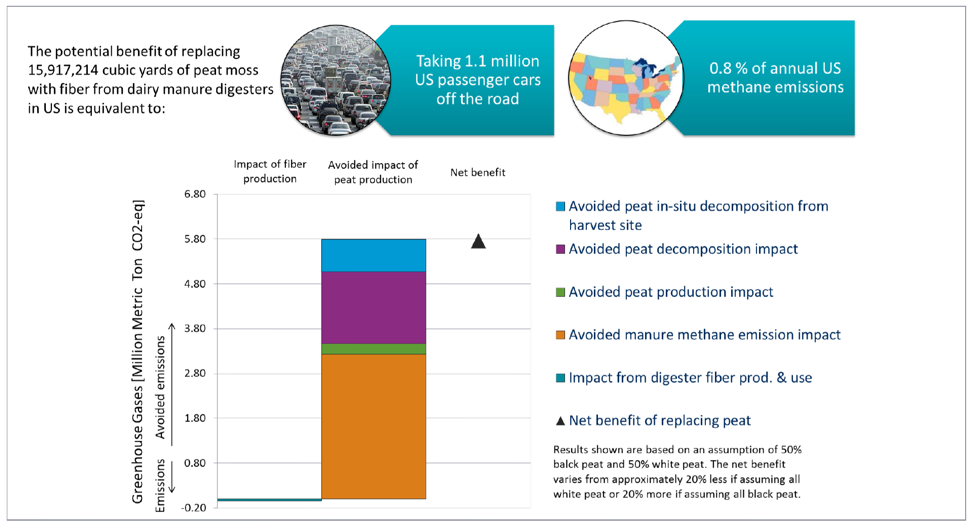 Quantis is a leading life cycle assessment (LCA) consulting firm specialized in supporting companies to measure, understand and manage the environmental impacts of their products, services and operations.

The findings indicate that dairy digester fiber provides an environmental advantage in comparison to peat moss for all environmental indicators examined. In terms of climate change impact, replacing peat moss with dairy digester fiber in the US market could avoid the release of greenhouse gases equivalent to 5.8 million metric tons of carbon dioxide equivalent (CO2-eq). This amount equates to the annual tailpipe emissions of 1.1 million cars or to reducing U.S. annual methane emissions by 0.8%.

What is Peat Moss?

Peat is organic matter resulting from the partial decomposition of vegetation, predominately sphagnum moss, in a water-saturated environment. The peat formation process takes place over hundreds of years resulting in the accumulation of plant debris in wetlands referred to as peatlands. In 2011,5,193,335 cubic meters of peat moss was used in the U.S.

What is Digester Fiber?

The digested fiber (that’s what we call it) in Magic Dirt is a byproduct made exclusively from DVO, Inc.’s patented anaerobic digestion (AD) process. Anaerobic digestion is a collection of processes by which naturally occurring microorganisms transform waste into valuable byproducts in a controlled, oxygen-free environment.

DVO’s design allows for a more complete digestion of waste streams, destroys more pathogens, produces more renewable energy, and economically captures more valuable nutrients. Organic waste is processed in the digester for approximately 20 days at a temperature of 100°F while being constantly agitated, which allows for better waste conversion to environmentally beneficial and useful renewable and recycled products.

The Case for Magic Dirt

The study specifically references Magic Dirt and says the following:

“Magic Dirt provides evidence that a fiber product derived from a dairy digester system can be a satisfactory replacement in the marketplace for horticultural peat moss.

University research supported the use of digested fiber (separated solids) as an effective soil amendment for potted plants. The fiber without post-digester processing was compared to a peat mix and the fiber proved to be an excellent growth substrate with correct physical properties to serve as a soil amendment with a good level of nutrients to spur growth. Unlike composted products, the digested dairy fiber has a longer fiber length and good air porosity. This gives the fiber a spongy quality with the ability to retain three times its weight in water for improved moisture control and weed prevention.

Unlike peat moss, the fiber contains Nitrogen, Phosphorus and Potassium along with valuable trace elements in amounts that promote good root development and plant growth. No heavy metals are present in the fiber.”

Bottom line: Magic Dirt is better for your plants and gardens and also beneficial to the environment.